It is that time of year again, the time of championship games and team favorites. This week happens to be the Super Bowl and the Winter Olympics are just right around the corner, so catching the big game is on many minds right now.

Catching the Super Bowl while on a Disney Cruise

If you’re a sports fan, you live for moments like this. Viewing parties, good food, fun with family and friends. But what if your team’s big game happens while you are on vacation? Unfortunately, we often don’t know our team will be in those final games until right before they happen. We plan our vacations months, sometimes even years in advance, so having your team playing in the Super Bowl while you are vacationing can often just be a fluke.

You go, have a great time and remember to set your DVR so you can see the replay when you return home. If you’re really lucky though, you may get to catch that Big Game while vacationing, and yes, you can still see the Super Bowl even on a Disney Cruise!

I have had the opportunity to catch the Super Bowl onboard the Disney Magic and am happy to report that sports fans did not go without seeing those touchdowns and tackles. 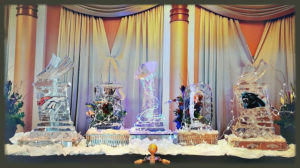 From the amazing centerpiece celebrating the Super Bowl, to spreads of game food, flowing drinks and a cheerful contingency of sports fans, seeing the Super Bowl aboard the Disney Magic truly was magical! Screens throughout the ship had the game on, including the giant funnel vision screen by the pool. You could sit in one of the many lounges, on the deck, in the pool, or just hang out in your room to catch all the sporting moments. 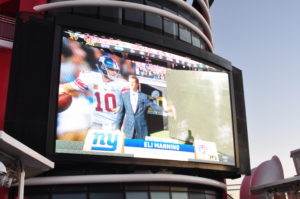 Watchin g the Super Bowl on Funnel Vision is, well…SUPER!

You will not see commercials. You may not see the halftime show. Disney Cruise Line specifically is of course Disney owned. Disney also owns ABC. If the Super Bowl or other Big Game is airing on ABC, you may see the halftime show or even commercials. If the game is not being aired on ABC, you will not. Disney will cut these so you will only see the game. If the commercials and Half Time show are important to you, don’t forget to set your DVR at home before you leave for vacation so you can catch it all when you return. 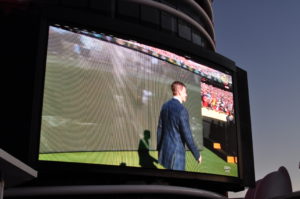 I will be attending the Disney Social Media Moms Celebration in just a few short weeks, and part of the adventure takes place on the Disney Dream. I am looking forward to seeing how the Olympics are aired, so be sure to check back for an update.

Thanks for reading and GO TEAM! (whoever your team is!) 🙂