Christmas in the Ozarks: Stage Shows for Everyone! 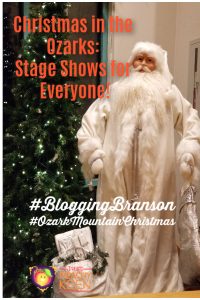 Christmas in the Ozarks: Stage Shows for Everyone!

Being in Georgia, I get asked often from a lot of my local friends and family if Branson is like Gatlinburg, Tennessee and now that I have been a few times to Branson, MO, I can respond that “No, Gatlinburg is like Branson!” because it is – Branson came first! A small mountain town that attracted people from all over for the natural beauty of the Ozarks, recreational activities like fishing, hiking and spelunking (caving) trips, and a climate not as harsh as other areas, Branson saw the tourists coming and decided they needed to do something to keep them in town for longer. While they had been attracting visitors since the late 1880s, it wasn’t until the 1950’s that it started to become the entertainment mecca that it is today, and it all kicked off with a group that may have a funny name to many (unless you are an Ozarkian. Is that a word? I don’t know, I just made it up!) 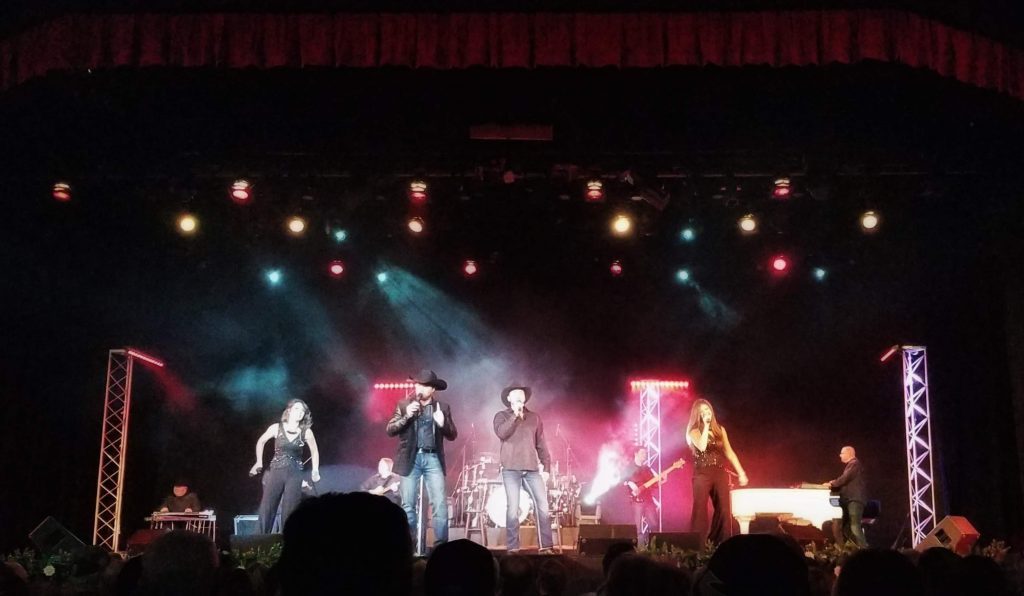 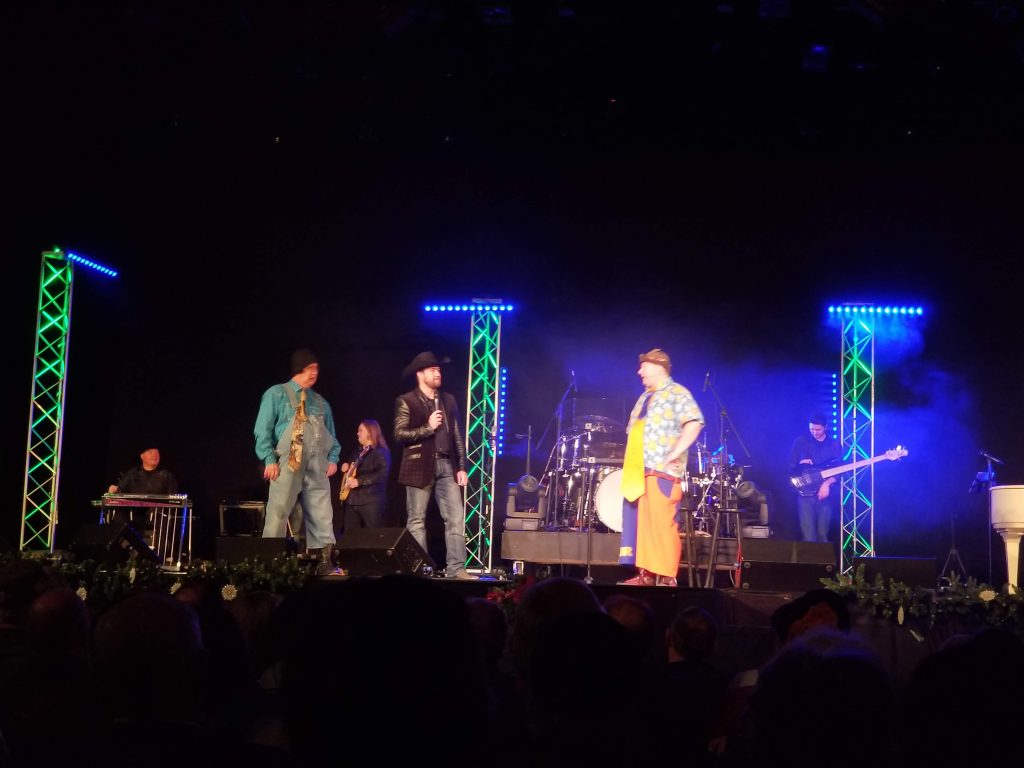 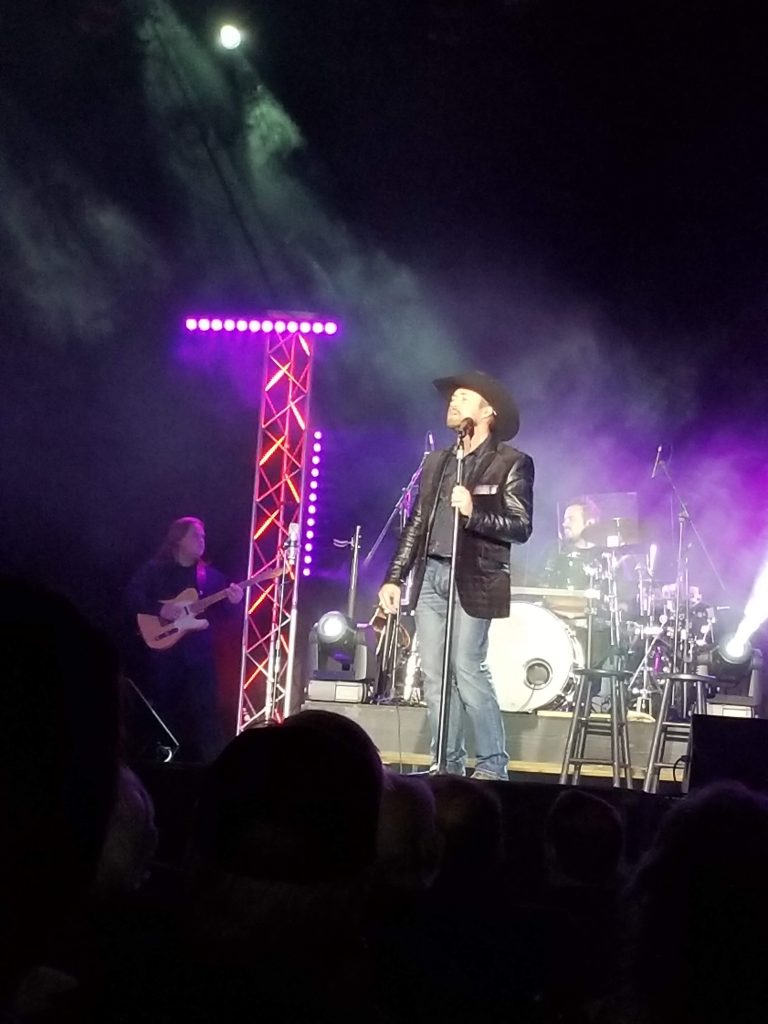 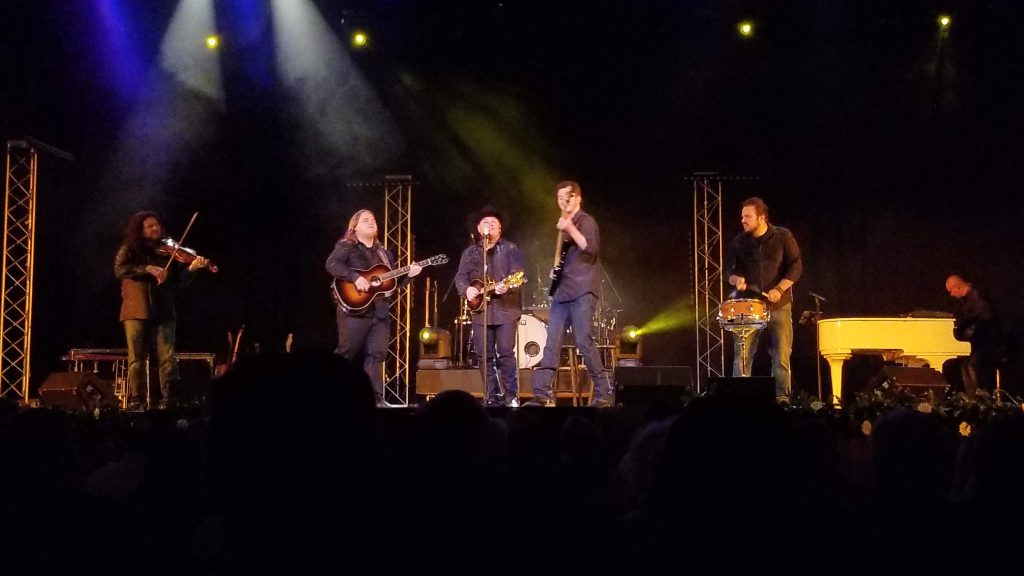 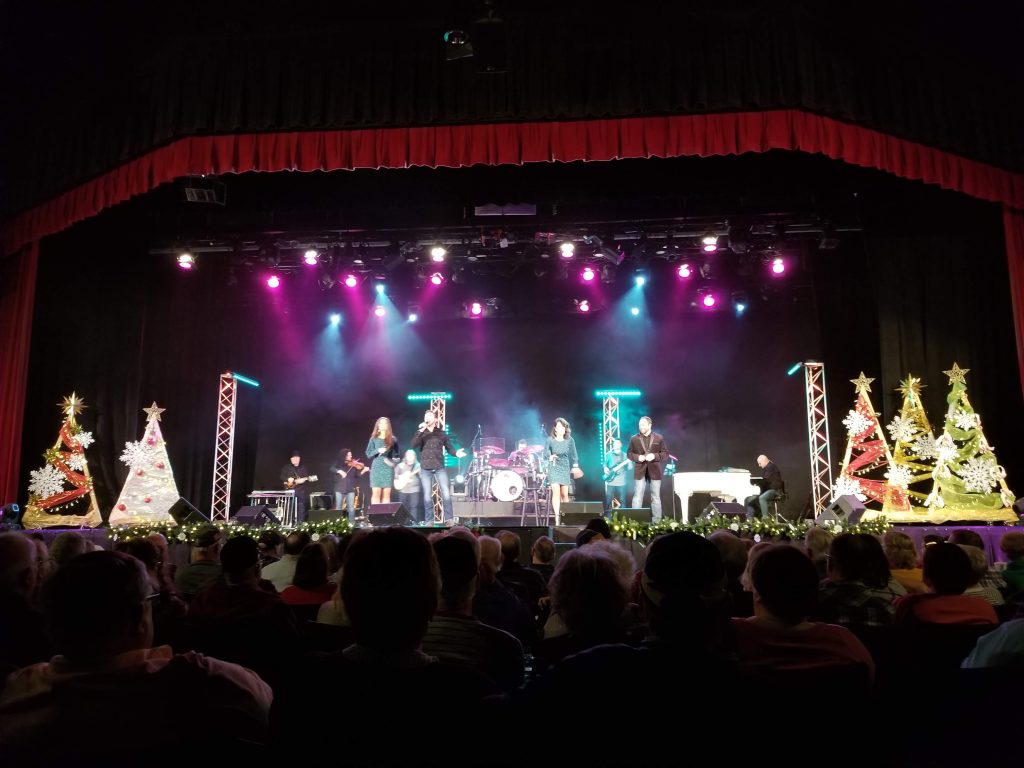 In 1959, the Mabe brothers formed the Baldknobbers Jamboree and began playing twice weekly shows on the Lake Taneycomo waterfront. With a mix of country tunes, mountain music and comedy to entertain all, the Baldknobbers were a hit and just 10 years later they built their own theater, making them Branson’s longest running continuous show.  Although they have moved into a new theater, they are still packing in the crowds with this Branson OG.

Today that show continues with the next generations of the Mabe family, and they are still doing what they do best with their take on country hits, Ozark mountain music and slapstick comedy. I honestly don’t know what part of this show I love the most! The fire and chemistry between lead Brandon Mabe and his beautiful wife Megan leave even the hardest hearts softened and not just once did it cross my mind, “Tim and Faith who?” Seriously – this is one dynamic couple and the love they have for music and each other comes across wonderfully in their performances. When you go, watch Brandon when he is in the wings and Megan is singing a solo. I think many of us hope for a partner in life that looks like Brandon does when he is watching his bride. I know I want my children to find that kind of love, it is beautiful!

One of the things that makes this show so good is the music – and it is definitely no minor thing! The Baldknobbers band has been named Branson’s Band of the Year many times and just listening to them play for a moment, you’ll see why. This is Ozark mountain music at its finest and I love the instrumental sets just as much as the musical numbers. Give me a fiddle any day, boys! Whew, yes!! Pardon me if my feet are clogging while I sit in my seat, I can’t help it!

True to the original show, comedy still has a strong presence in the present-day Baldknobbers show. I love corny jokes and around my house I have been routinely referred to as the Queen of Corn, so this type of comedy is right up my alley! Everything is clean, safe for all ears, but sure to get a chuckle no matter who you are.

during christmas, the show takes on an extra holiday touch with modern versions of Christmas classics and throwbacks to old standards. You will be be-bopping in your seat and tapping your feet throughout the whole show. If you want a piece of Branson history coupled with great entertainment, then the Branson Baldknobbers is the show for you! 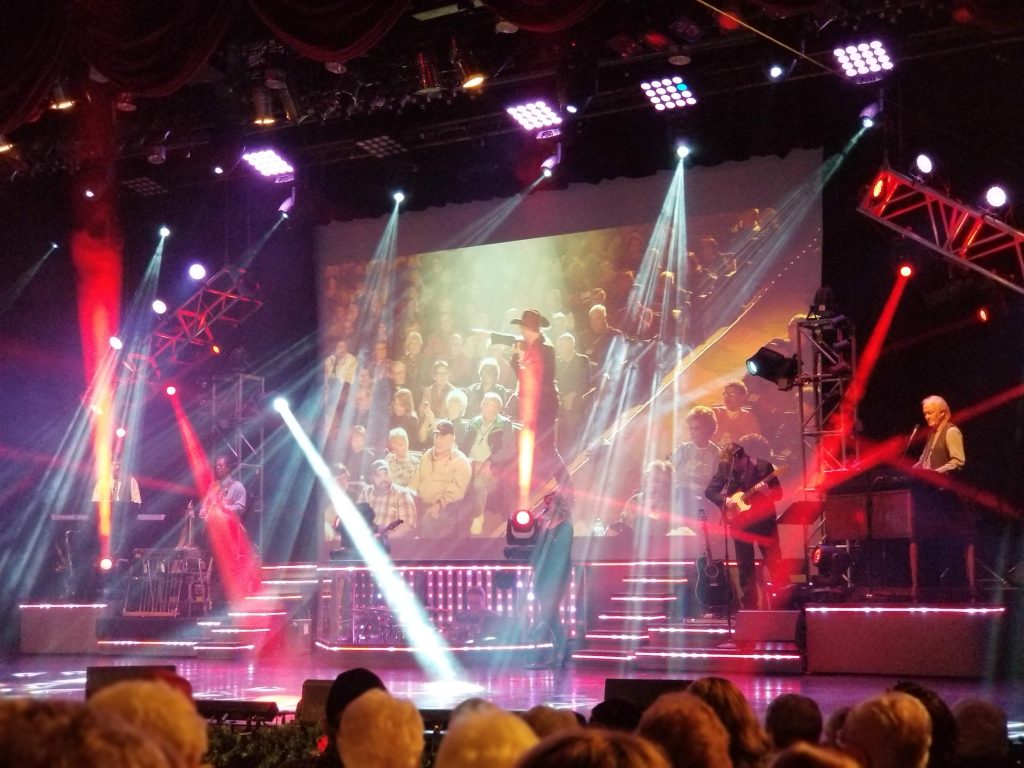 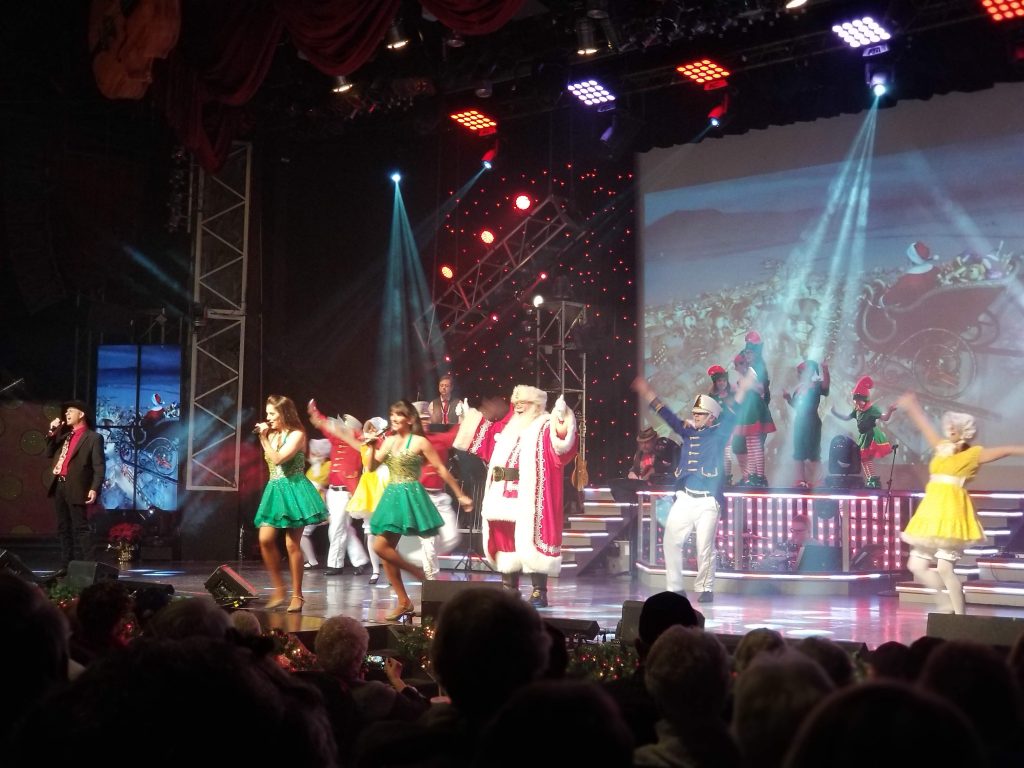 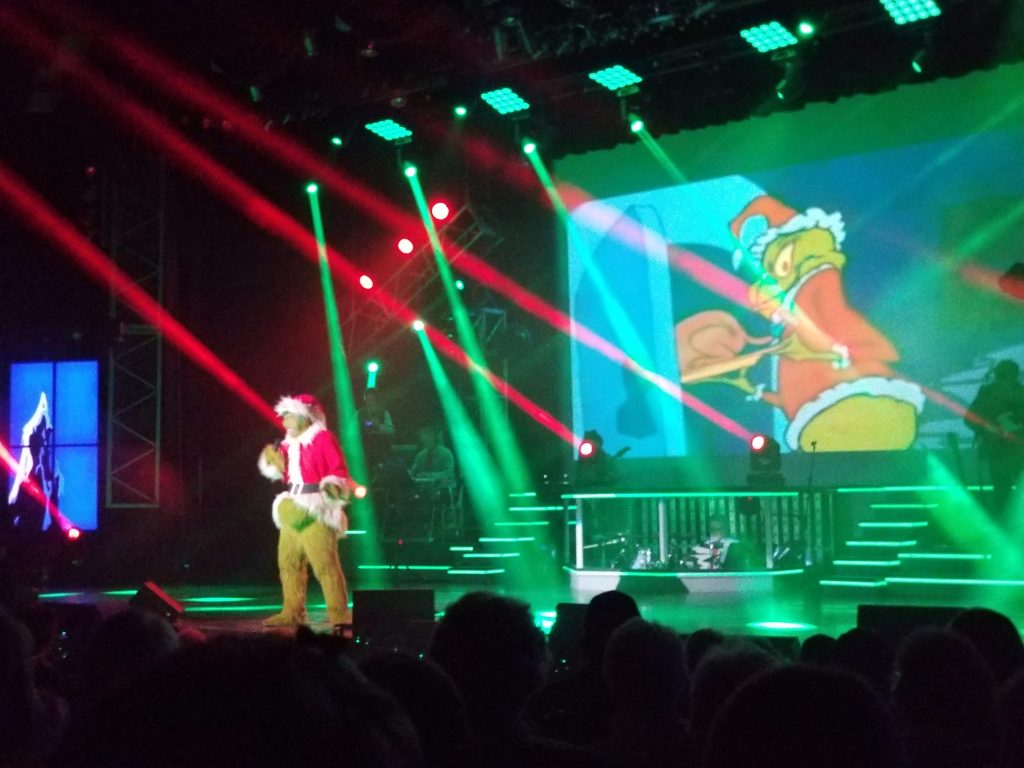 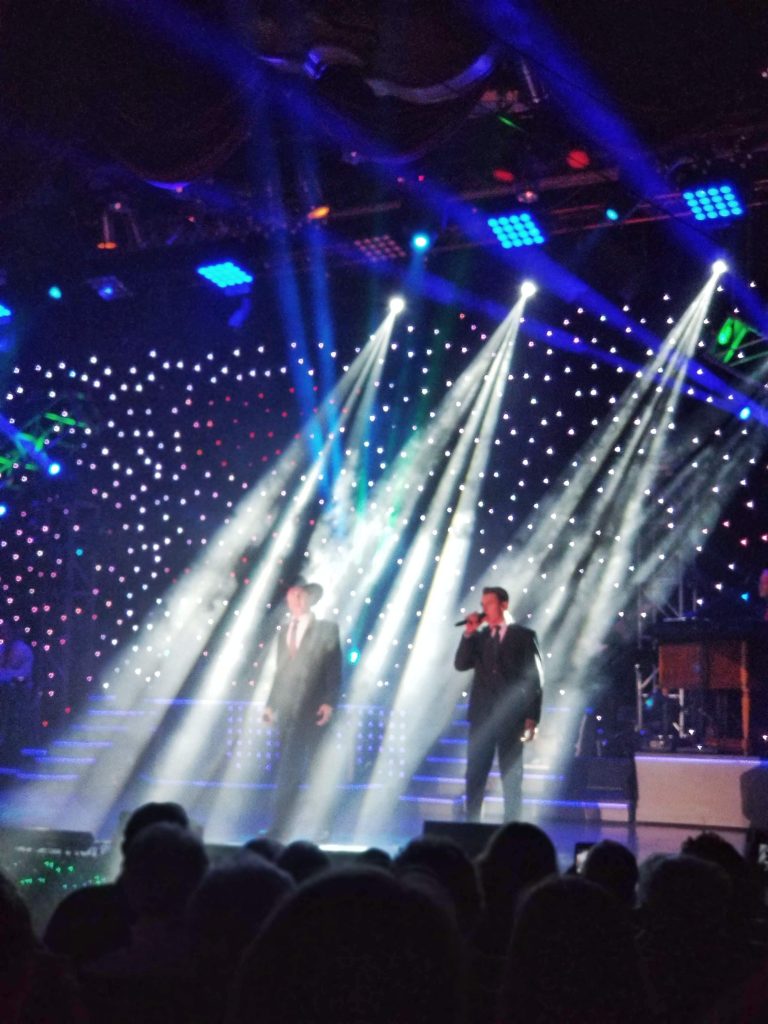 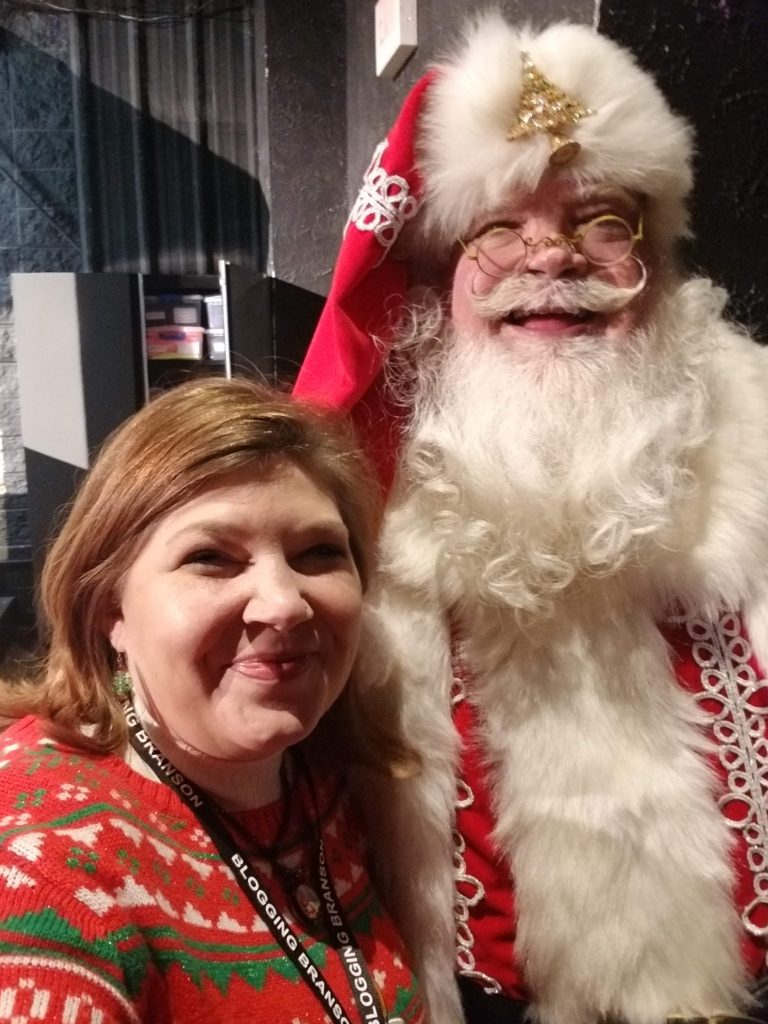 Clay Cooper, his lovely wife, Tina, their sons Caden and Colton, and a host of other friends come together on stage for high energy entertainment with country and pop hits, original musical numbers, dancing to fantastic choreography, beautiful costuming, lights, a little comedic relief and lots of heartfelt moments. The patriotic song written and choreographed by Tina is AMAZING and will give you a surge of American pride right to your core!

The Christmas show is a combination of both the regular yearly show AND a Christmas show, with one half the set you might see in June (July, August, etc), and the second half all Christmas magic. You will be smiling ear to ear as favorite Christmas songs are performed with fantastic vocals and an energetic band and the smiles will continue as familiar characters take the stage and attempt to steal – or save – Christmas. Santa at Clay Cooper’s Christmas Express is the real deal and you are definitely going to want to grab a photo with him after the show. Please remind him I have been a (mostly) good girl this year!

The Clay Cooper Country Express is housed in a gorgeous state-of-the-art theater that includes all kinds of special effects like lighting and fog/smoke. If you or someone in your party has a seizure disorder, please note that there may be brief periods that you (or they) may need to close their eyes and somewhat shield themselves from the flashing lights. I do have a seizure disorder and while did not have any episodes, there was a time or two that I shielded my eyes and lowered my gaze to help avoid any triggers. Everyone is different and most people with this disorder know what their triggers are. Flashing lights is one of mine but I left the show energized and ready for more, feeling no ill effects.

Clay Cooper’s show really does have something for every member, and generation, of your family. From old (OLD) country to new pop hits, a variety of dancers and plenty of audience interaction, this is a show that you can take little Johnny all the way up to Great Grandma Rose to and both of them will be highly entertained. It truly is a show that CAN”T BE MISSED. If you are in Branson, you must see the Clay Cooper’s Country Express. 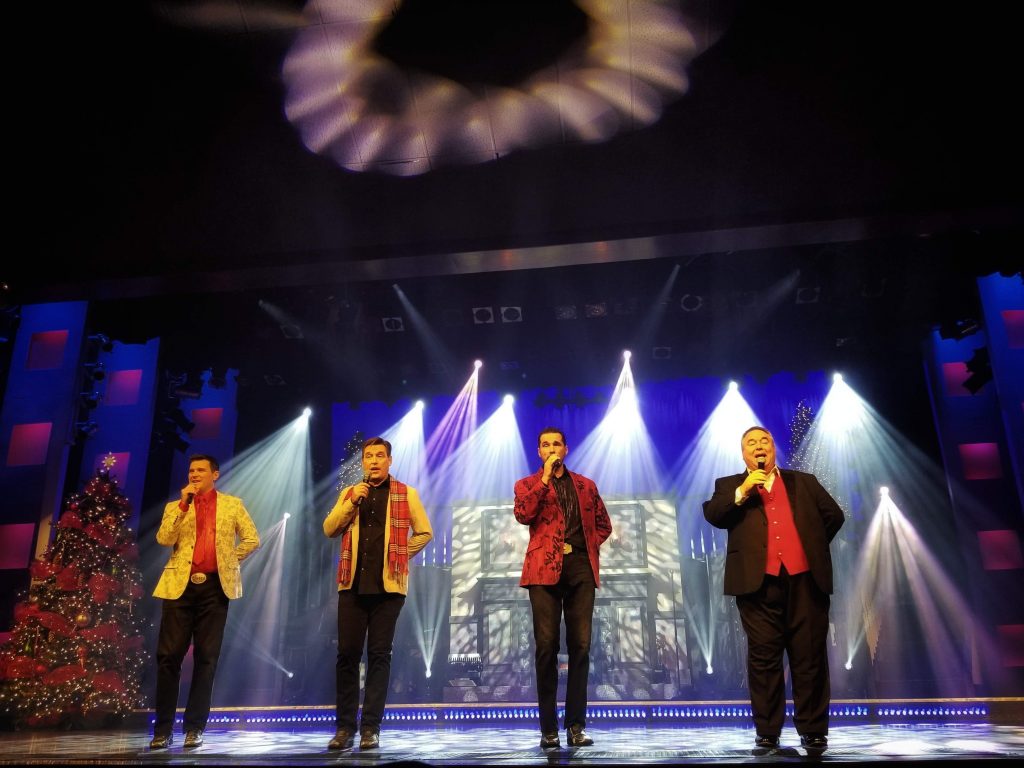 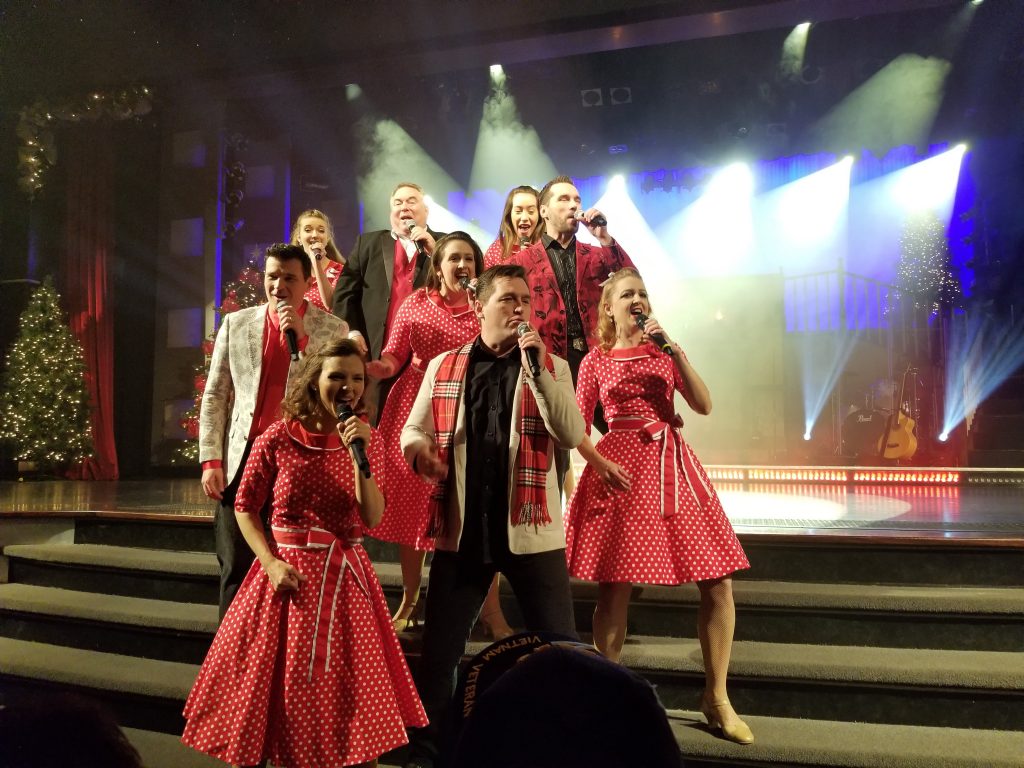 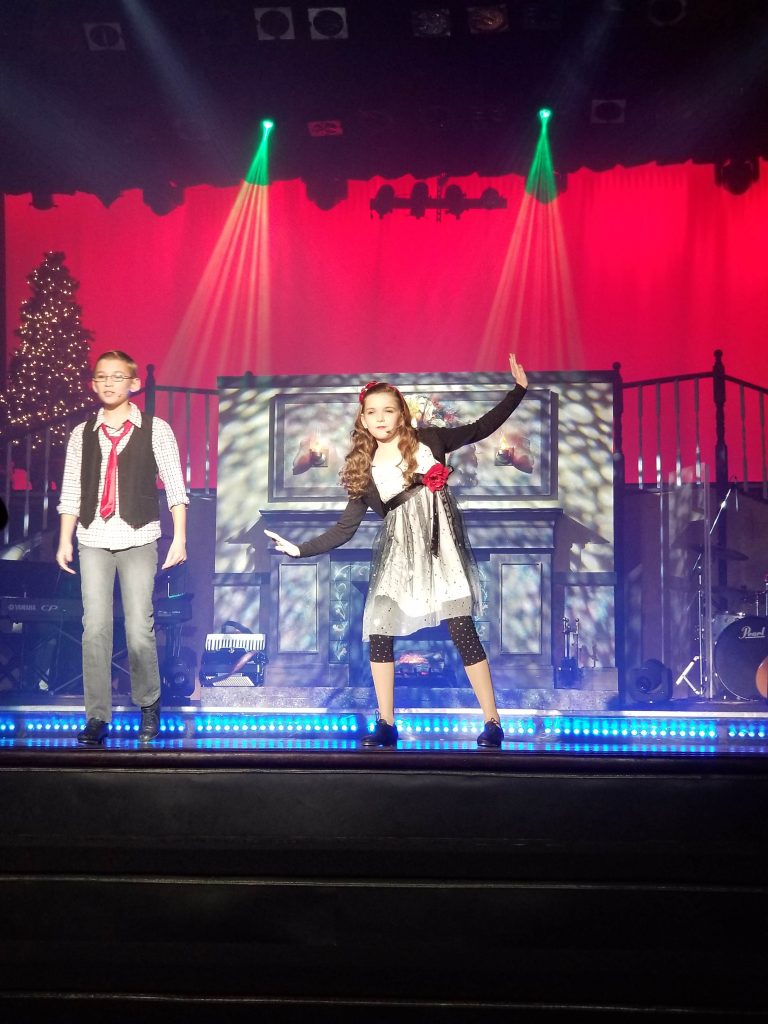 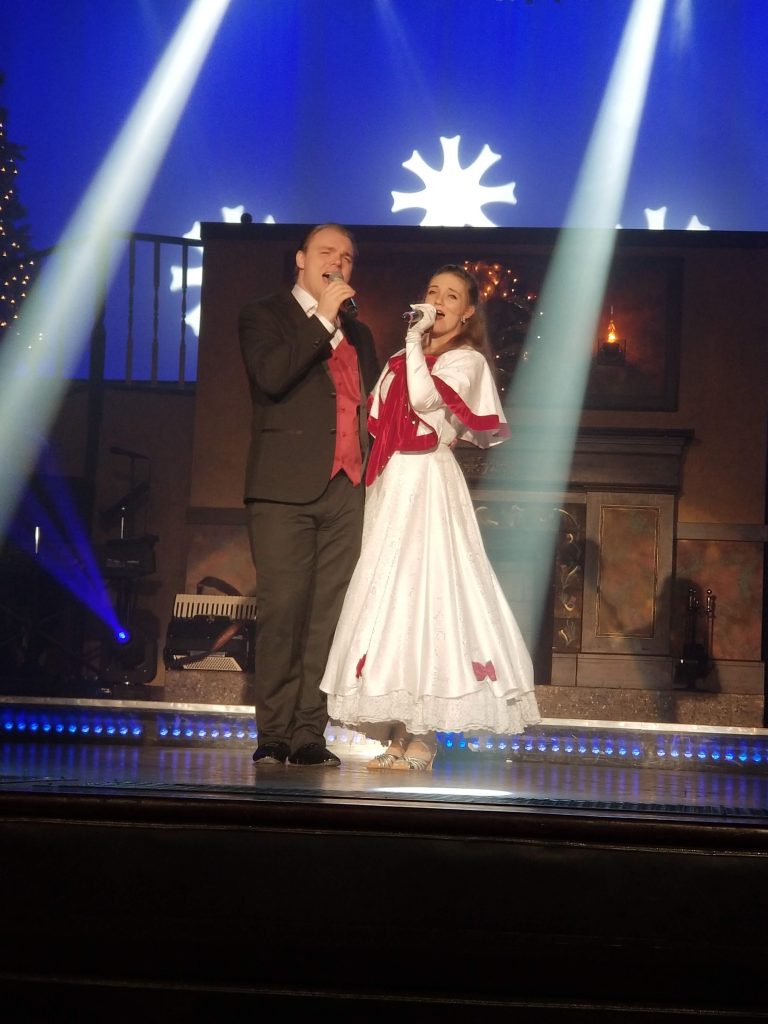 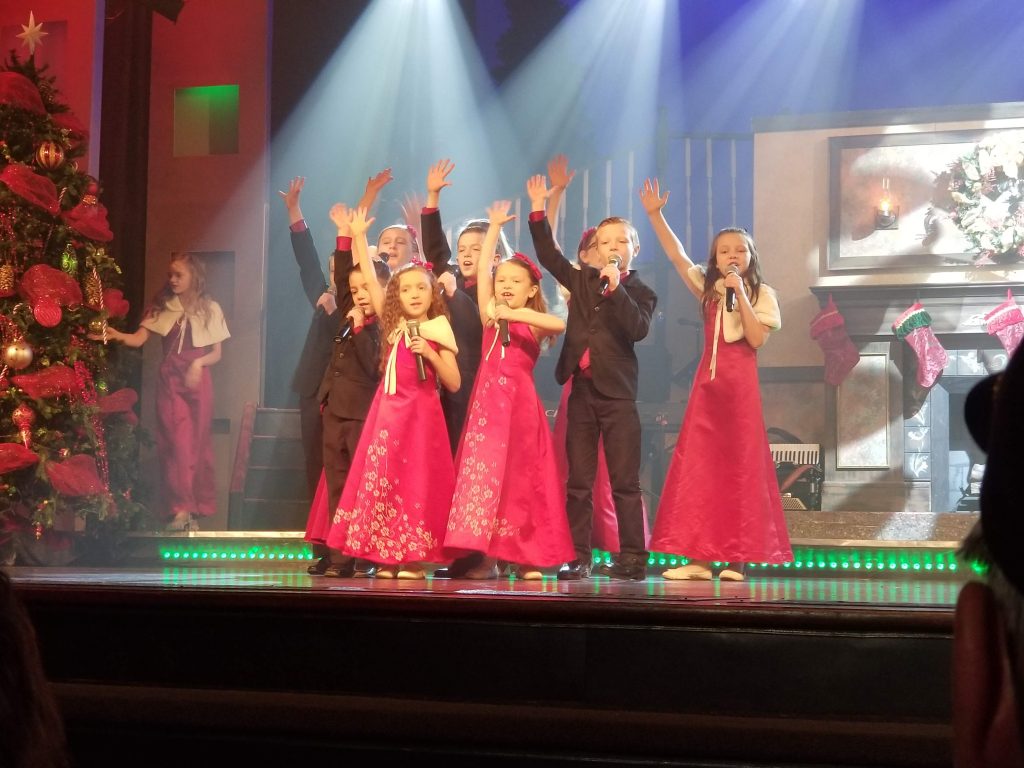 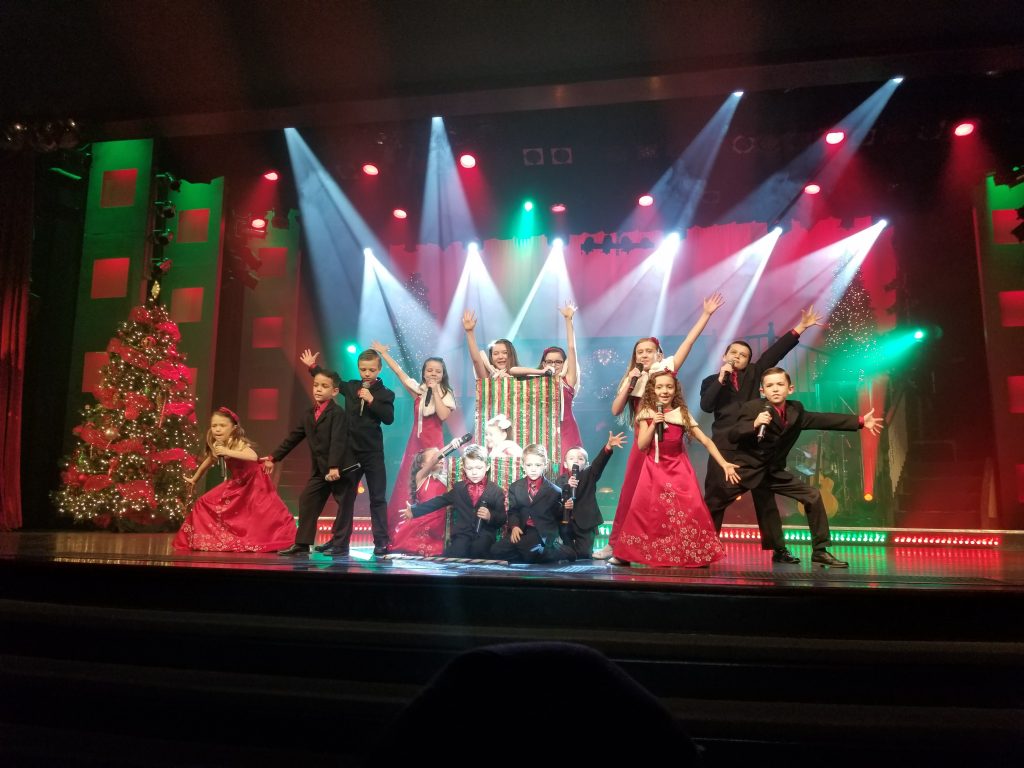 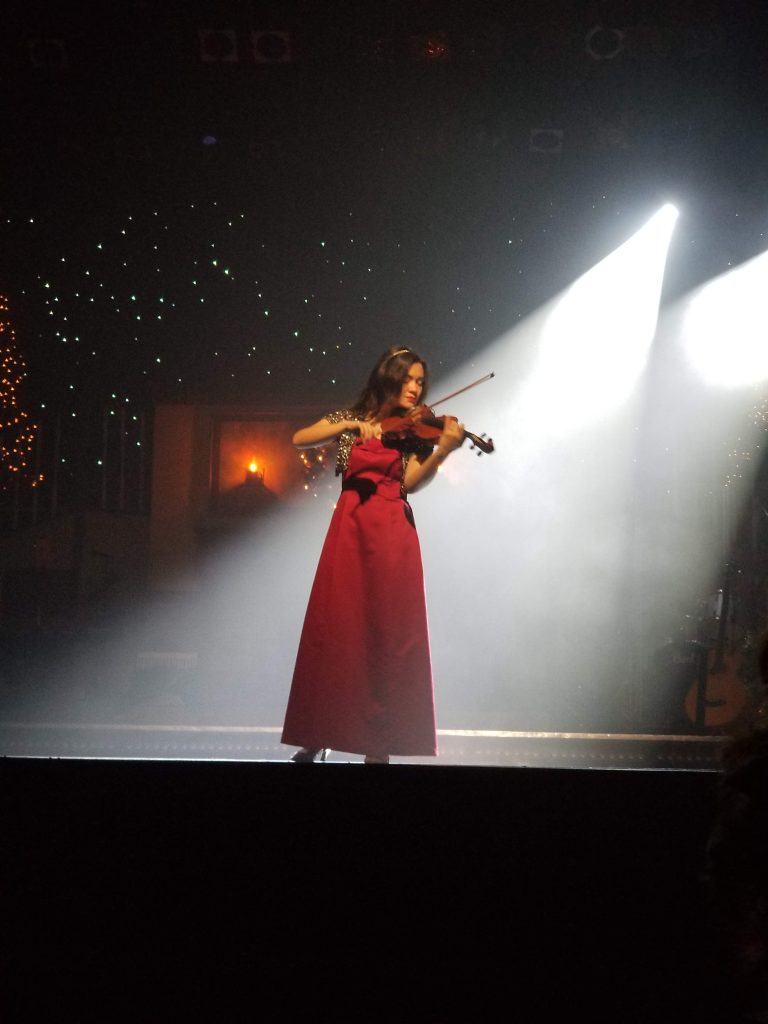 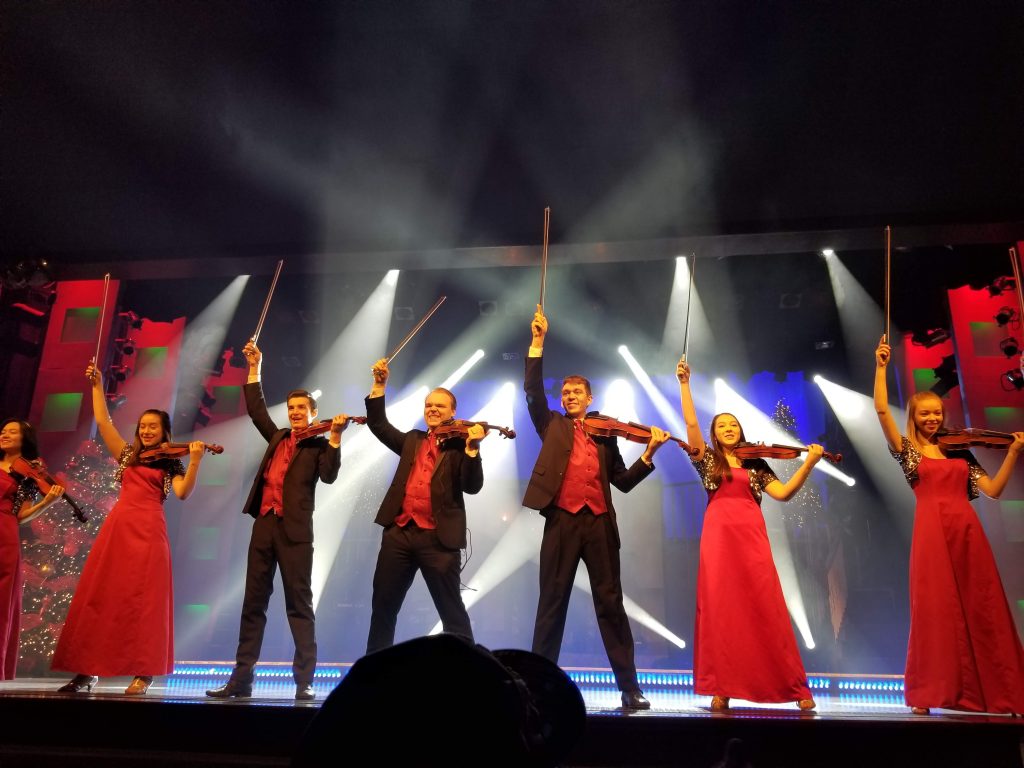 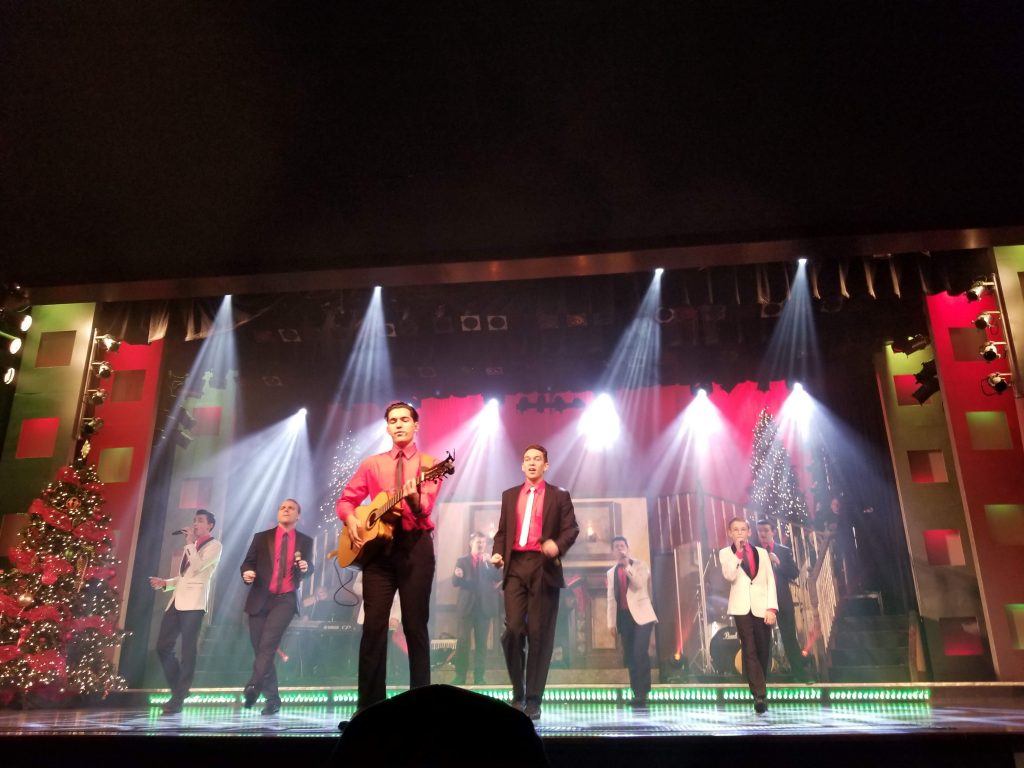 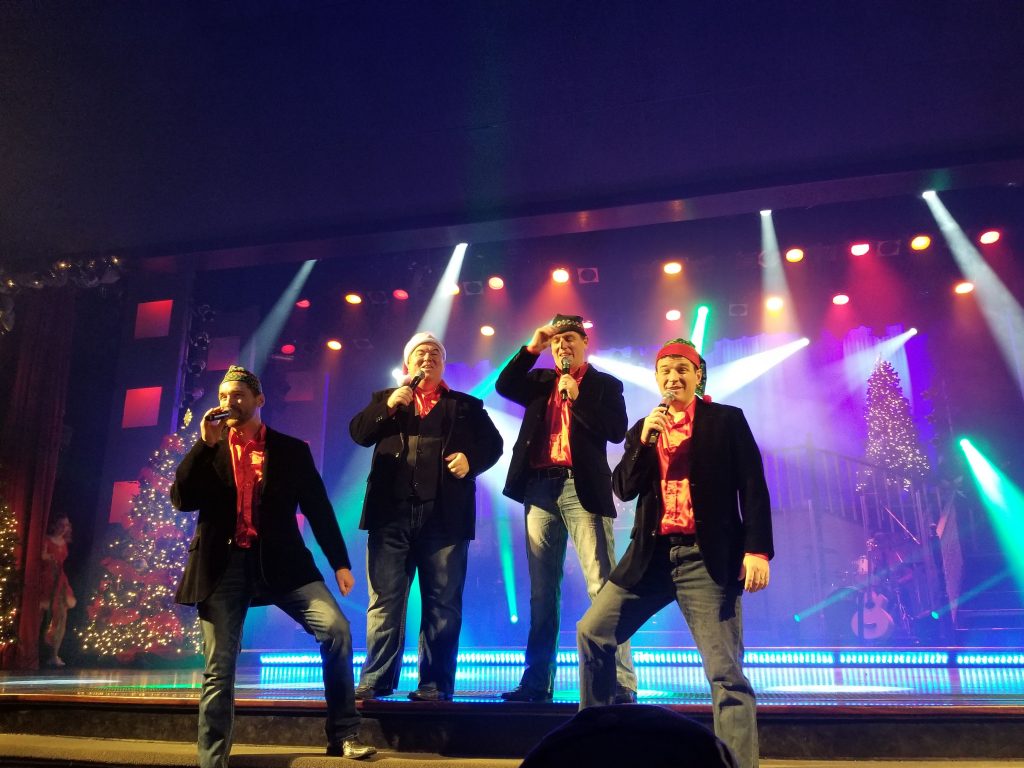 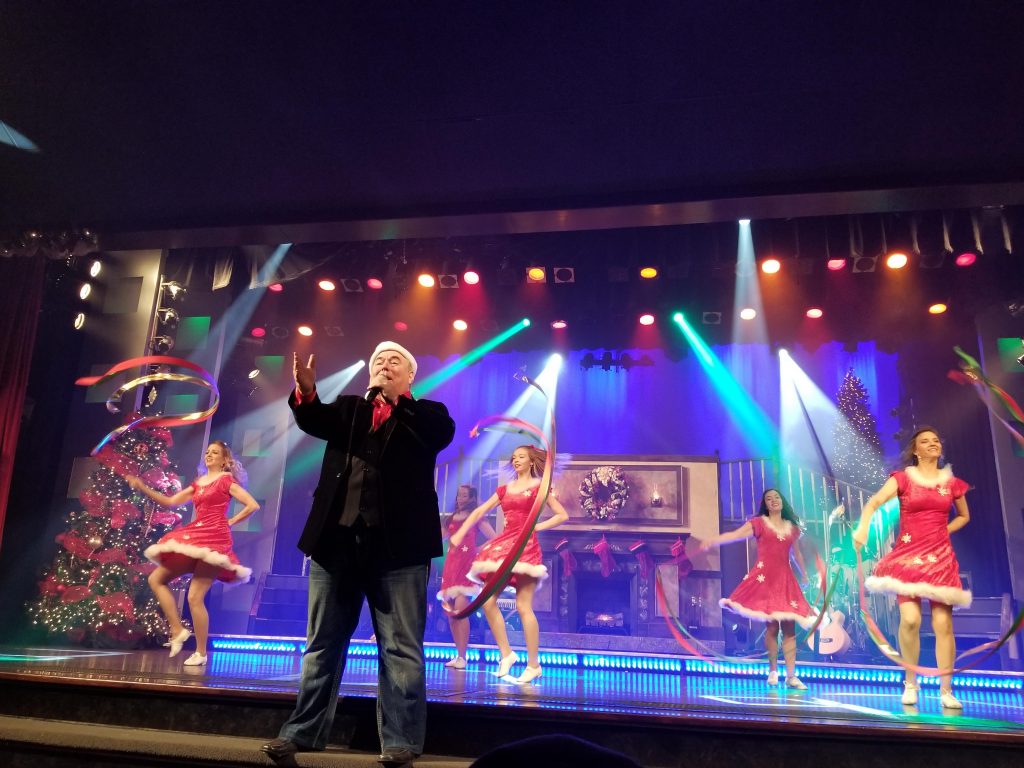 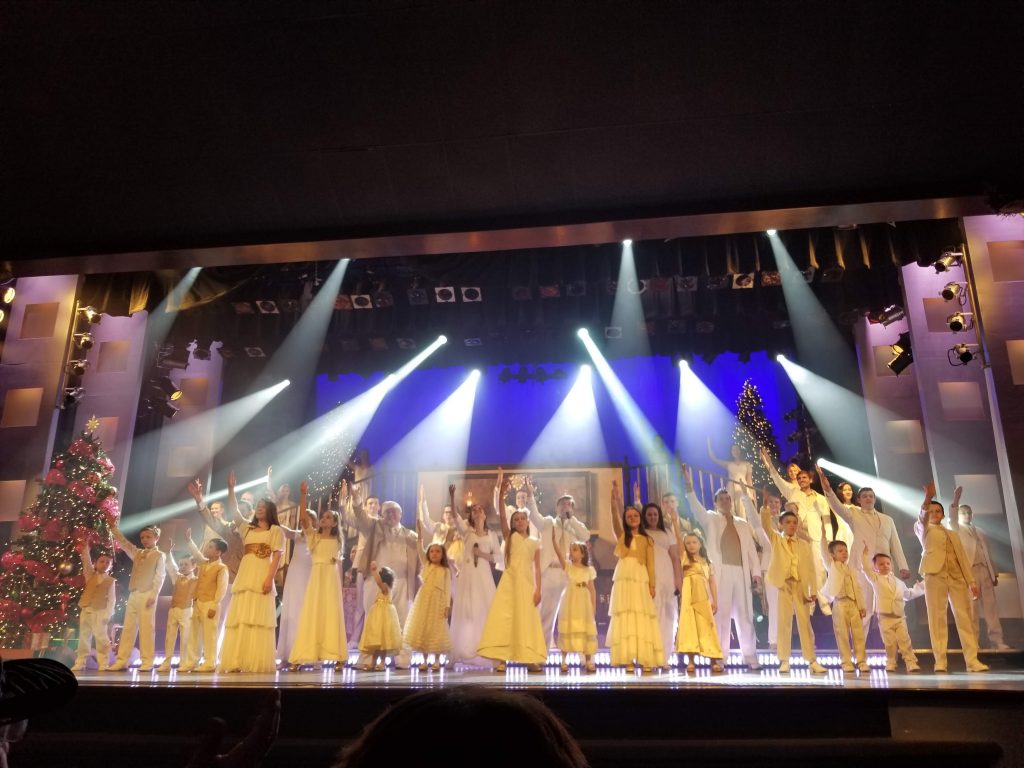 The Hughes family consists of four brothers: Marty, Jason, Ryan and Andy, onstage with their families. There were five brothers playing regularly, but middle brother Adam moved to California to help out his wife’s family, and while he is certainly missed, they had no trouble filling those empty spots on stage with more family! Like, a whole lot more!

Between the four brothers on stage, also performing are their wives: Cindy, Mara, Carina and Becky (although oldest brother, Marty’s wife Cindy has taken a break from the Christmas show this season to focus on her work backstage), their kids, and the grown kids’ spouses. It truly is a family show as the entire family takes part, all the way down to the very littlest one (who happens to play the role of baby Jesus in the Christmas show – a role they have been able to fill internally for YEARS).  This family was truly born to entertain and with the brothers, wives and al the kids (over 30 kids onstage!), it is no wonder they are known as the World’s Largest Performing Family!

During the holiday season, the Hughes family becomes a 100% true Christmas spectacular. With amazing vocals that feature wonderful harmonizing, beautiful instrumentals and even a storyline during the second half that a famous Christmas icon leads to share the true meaning of Christmas, you will be left in as much awe and wonder as I was. I laughed, I cried, I sang along and I truly, truly loved EVERY. SINGLE. SECOND. Once again, like in my Christmas in the Ozarks overview post, I am re-watching the video recorded during our showing and once again, Emmanuel sung by the brothers has left me a sobbing, weeping mess. but it’s okay because the kids singing Happy Birthday, Jesus got me smiling again. (I’m actually smacking myself for not buying the CD because if there is one thing that could help spirits during my commute in Atlanta traffic, it would be these fantastic performances!)

A unique addition to the Hughes Music shows is that you can have dinner at the theater before the show, prepared by a world-renowned culinary chef. There is also a bistro to get sandwiches, soups, salads and other lighter fare.  And don’t forget to grab some pepparkakor during intermission, prepared with love and goodness by Mrs. Hughes (senior) in the theater’s kitchen.

Besides being named as Branson’s Entertainers of the Year, the Best Show and so many other accolades, it is no wonder that the Hughes Brothers Christmas Show has also been named Branson’s number one Christmas show for ten years running, and even though I keep saying that each of these amazing shows are a must see while in Branson, it is no secret that my heart lies in the Hughes theater. I want to be a Hughes, too! Think they’d let me sing? Nah, we’ll save that for the professionals.

For schedules and tickets go HERE. 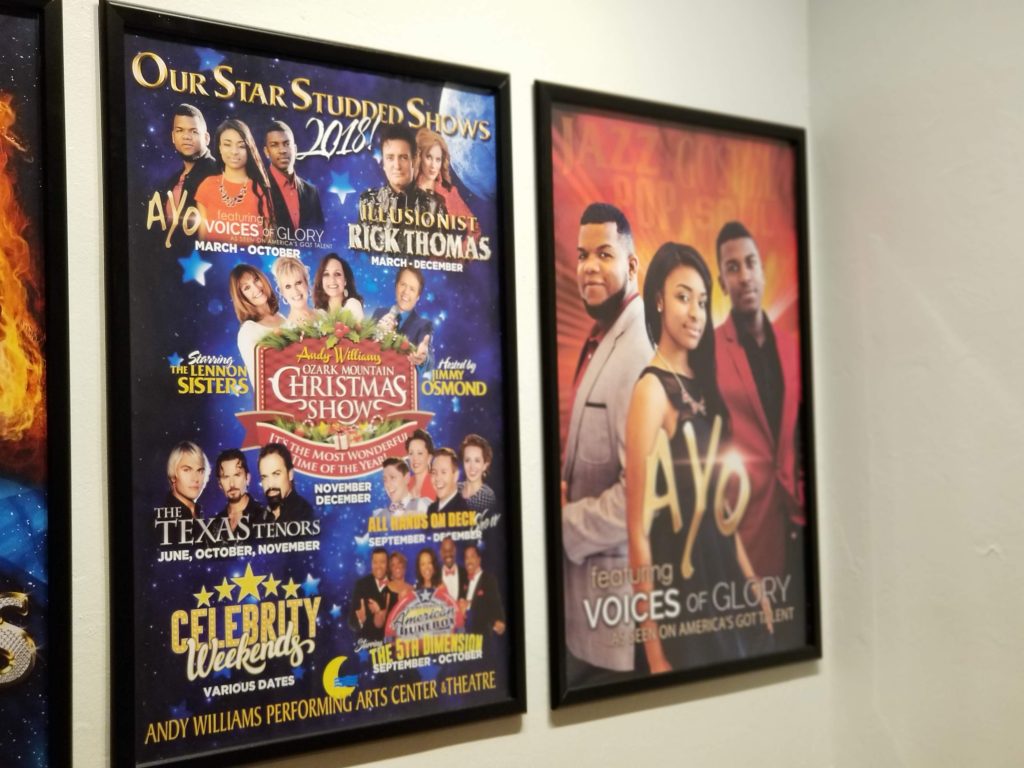 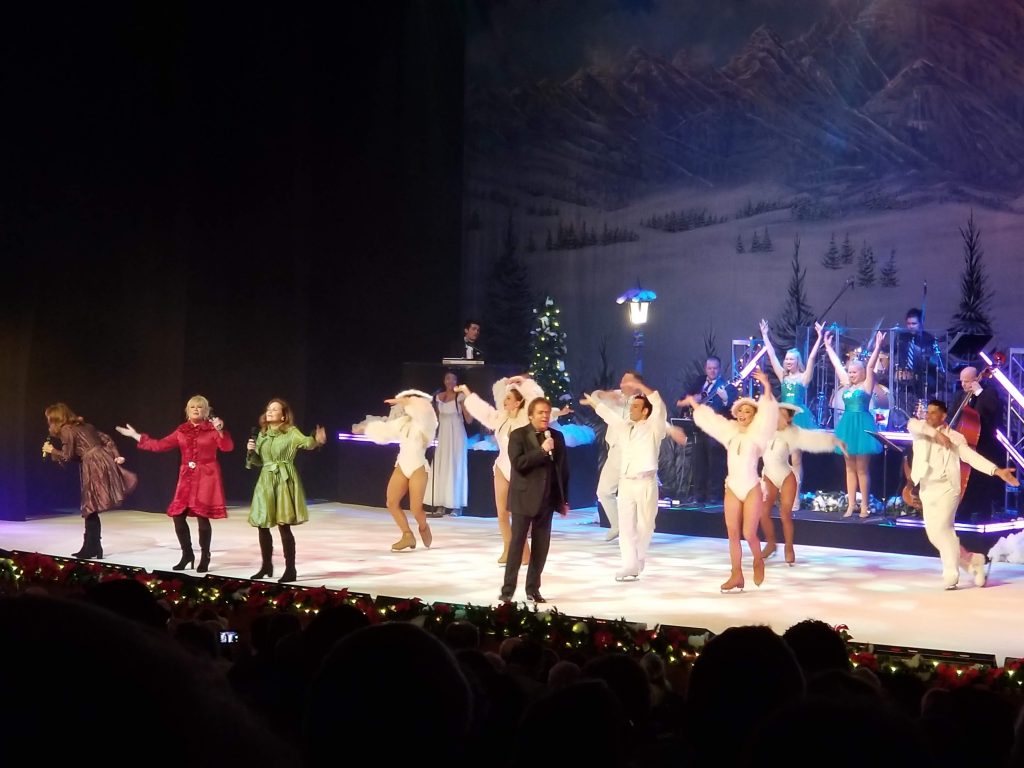 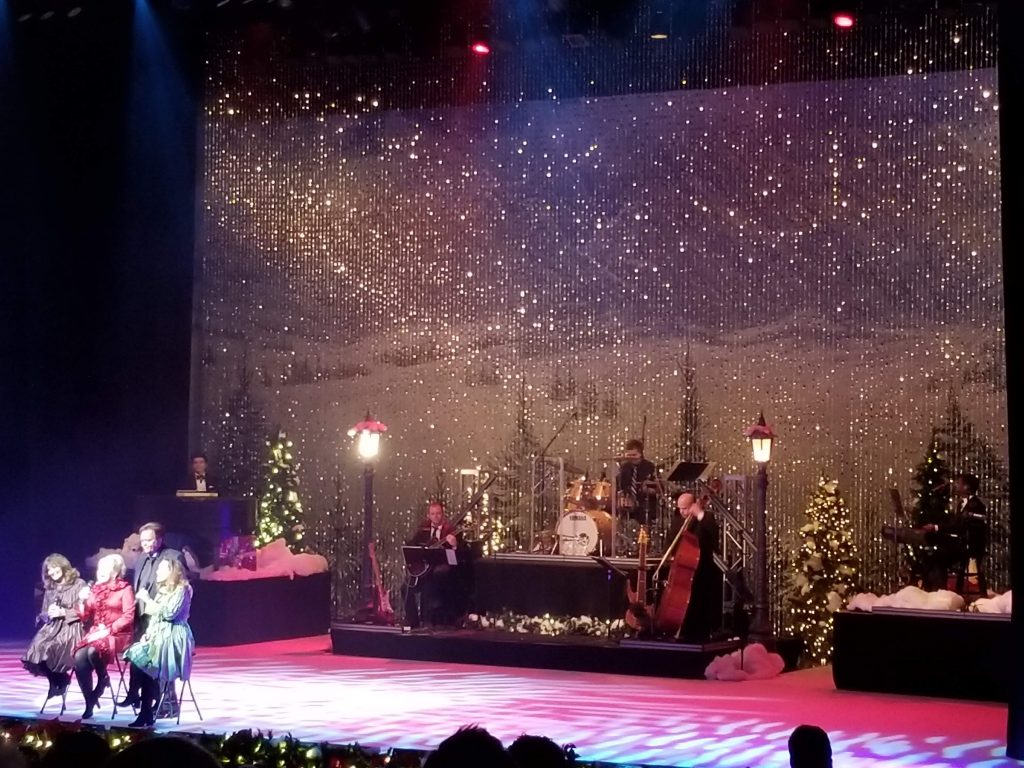 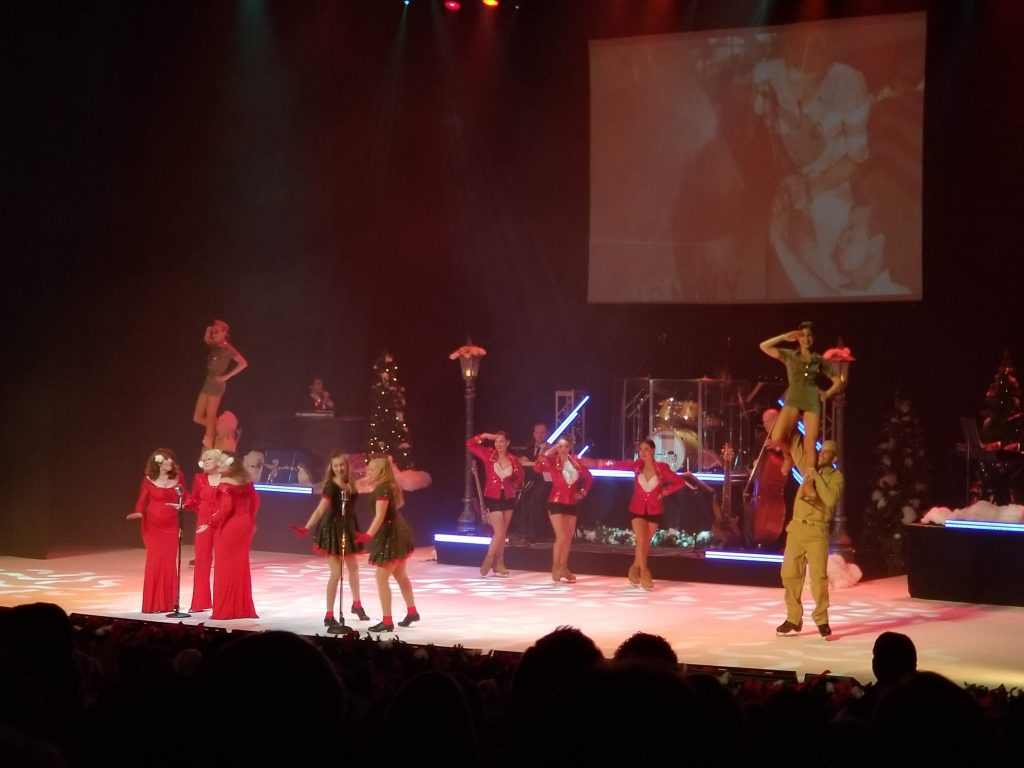 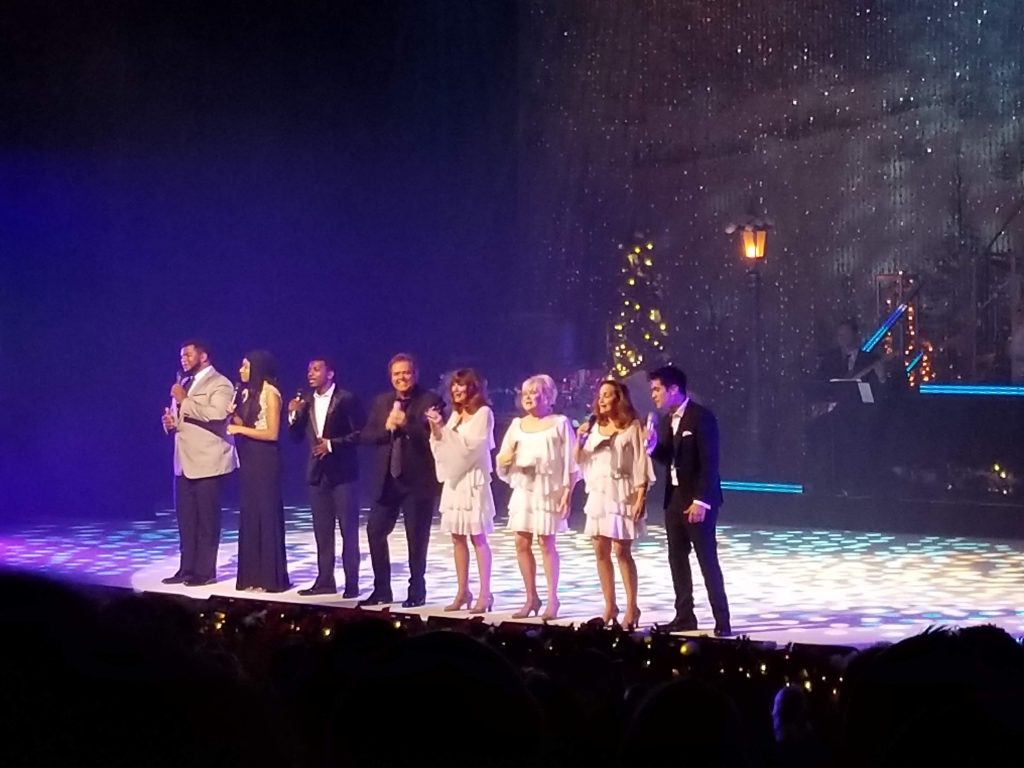 During our #BloggingBranson media trip, we were given the additional treat of seeing the Andy Williams Ozark Mountain Christmas Show at the beautiful Moon River Theater. Even though Andy Williams is no longer with us, the fantastically talented performers he helped to launch the careers of are still going strong and I know Andy must be smiling down at Branson nightly to see how wonderful they have carried on the legacy of good, wholesome family fun.

This show is resplendent with nostalgia, with the Lennon Sisters singing classics we all know, video clips of Andy Williams, the sisters and the Osmonds  – included Jimmy’s beginnings as a 3 year old on the Andy Williams show, and so many things that made me harken back to the days of watching Andy’s tv show with my grandmother, filling me with so many wonderful memories.

This show is a huge draw, there were over 10 different motor coaches full of guests visiting during our showing, so if you want to catch this, plan ahead and get your tickets HERE. 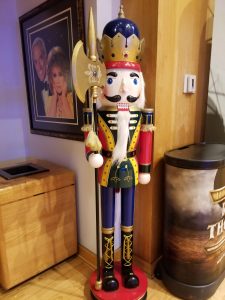 No matter what your musical tastes are, you are bound to find a show that can enjoy with your entire family. I hope you’ve enjoyed this small sample of just a few of the many, many, shows that Branson has to offer – after all, it is the entertainment capital of the world!

Be sure to join me as we continue on our Christmas in the Ozarks journey next week, and until then, keep that song in your heart and SING IT LOUD!

« Christmas in the Ozarks: Silver Dollar City and Branson Belle Showboat
Ice, Ice baby – 12 Things to do in Preparation for an Ice Storm »