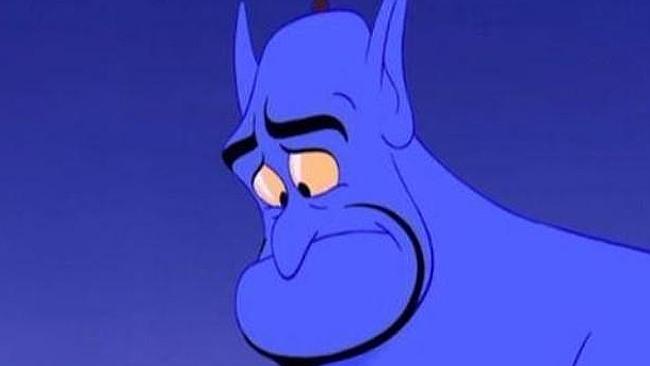 I ate SpaghettiOs and a grilled ham and cheese sandwich the night Robin Williams died. After working on my feet all day, I was starving and planned to cook a good meal for the family, but then I got on Facebook to share my thoughts on finishing a Storm of Swords, the 3rd novel in the Game of Thrones series. It was Facebook where I saw the devastating news. 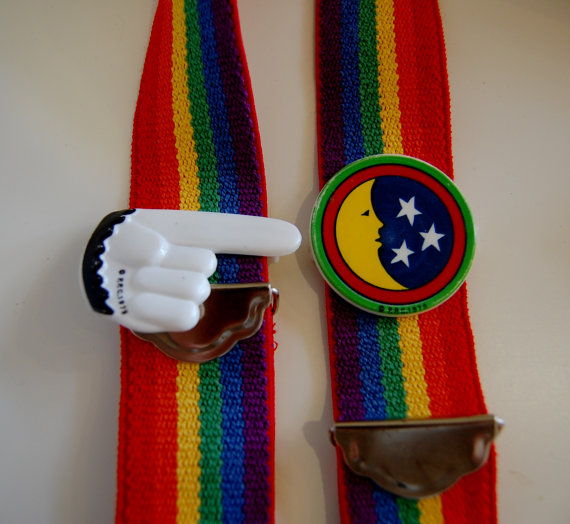 Robin Williams was born July 21, 1951. He was only a year younger than my parents, and like my parents, he has had a role in my life for as long as I can remember. It was only apropo that I turned to a childhood comfort food for my dinner as I read more and more news of his passing yesterday, August 11, 2014.

My first memories of him are as Mork on Happy Days before he got his own show, Mork and Mindy. Somewhere in my attic, there is a box of my childhood memories and keepsakes, and in that box lies a pair of rainbow suspenders, just like Mork’s. Throughout the years of his notable film career, I found more and more reasons to love him with each new role as an actor, his work as a humanitarian or his wit as a comedian. I loved him for all those reasons, but I also loved him because my psyche understood his psyche. Kindred spirits know each other, they recognize in others the traits they themselves carry.

Robin Williams was a magnet. He drew people to him like a moth to the light. There was something about him that people loved (or hated, he had his detractors, to be sure). He had the ability to make you laugh and make you cry. His timing was excellent, his brain a rapid fire jumble of brilliance. He also had a level of sadness that only those with the same sadness could ever really see.

The great quote, “be kind for everyone you meet is fighting a battle” is no more true than with people with mental illness. Depression, Bipolar Illness, Schizophrenia, the list goes on and on. Those people’s battle lie within them. Not only do they have the daily battle of life; the ups, the downs, the waxing and waning of the tide that is life, they also have a constant war going on inside their heads and the feeling deep down that there is an absence. A hole that can never be filled.

I know that hole. I also know the rhythm that comes with trying to fill that void. Learn more, see more, do more…more, more, more. Fill it up, fill it in, get it gone. Wear a mask. A big, bright, beautiful mask that no one can see though. And then the day comes, and the pendulum swings, and you suddenly see the void for what it is; not a hole that can be plugged, but a chasm that can never be filled for a monster lies in the bottom, eating away everything you could hope to fill it with. It is there, standing on the precipice, looking into the abyss where you have to turn around and walk away. Not give in, not let the darkness win. And you have to do this every single day for the rest of your life, usually behind that big, bright, beautiful mask you built for yourself. Because it is there, it will always be there and it will truly swallow you up if you allow it.

Whoever fights monsters should see to it that in the process he does not become a monster. And if you gaze long enough into an abyss, the abyss will gaze back into you.
Friedrich Nietzsche

Sadly, it appears at this time that Mr. Williams looked too deep into the abyss and he let it claim him. While I am beyond just sadness that he is gone, it is the manner that breaks my heart. It diminishes hope momentarily, with the far off voice of the monster telling you, “see, even he couldn’t avoid the darkness forever.”   And you are left wondering how you can continue to walk away from the darkness, or worry about those that you love that hover too near the edge.

So what do we do? We walk away from the monster. We call someone, we answer when someone calls us. We listen and we talk. We cross this threshold of a door that has been sprung open by Robin’s death. We STOP LOOKING AWAY FROM MENTAL ILLNESS! We stop being ashamed, we stop hiding. We take our medicines if we need them, we never stop therapy. Therapy, talking to someone, is what gets us out of our own heads for a while. It is as important to living with a mental illness as air is to life.

As does it always happen when a celebrity passes from a method that is not natural, chatter springs up across the internet, the media, everywhere you look right now, someone is talking of Robin William’s death. What they are also talking about is depression. Getting help. I have read so many comments of how they never could imagine he was so depressed. It is because he wore his mask well. He honed it, crafted it, made it so much his persona that most people couldn’t see the pain beneath. If you are wearing a mask like this, take it off. It’s okay. If you love someone you suspect of wearing the mask of happiness, help them remove it. Let the real person show. 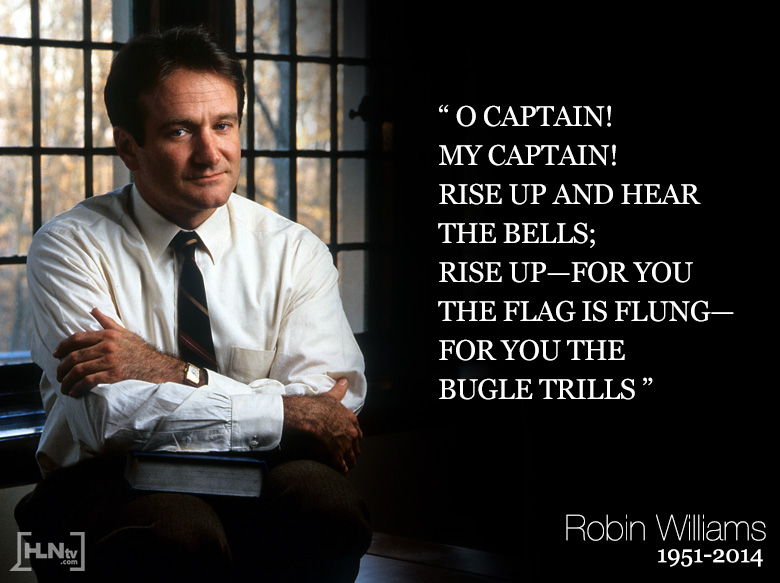 It’s time to stop hiding. It’s time to stop making mental health a taboo subject, only brought up in moments like these. There’s no way the mental health problems will ever be solved if we can’t even discuss them! Even though we have lost a brilliant man, let us gain through his loss the voice to finally speak up, speak out. To stop for once and for all the stigma that is associated with mental illness. It is only when the taboo is removed that changes will finally occur. Keep talking, America (and beyond), but also, let’s put some action behind those words!

If you need help, seek it. Don’t wait.

Rest in peace Mr. Williams. May you have that  front seat in Heaven while Mozart tunes up. Elvis is on deck and laughter fills the great hall. Bless you; you funny, serious, brilliant but often times morose man. The jokes will never be as funny without you, the serious parts will never have the same depth again, either. You will forever be missed. You’re only given a little spark of madness. You musn’t lose it. – Robin Williams

As an update, Robin was suffering from a rare brain condition called Lewy body dementia. You can read more about it here. Now matter what his demons, we all mourn the loss of a brilliant man. 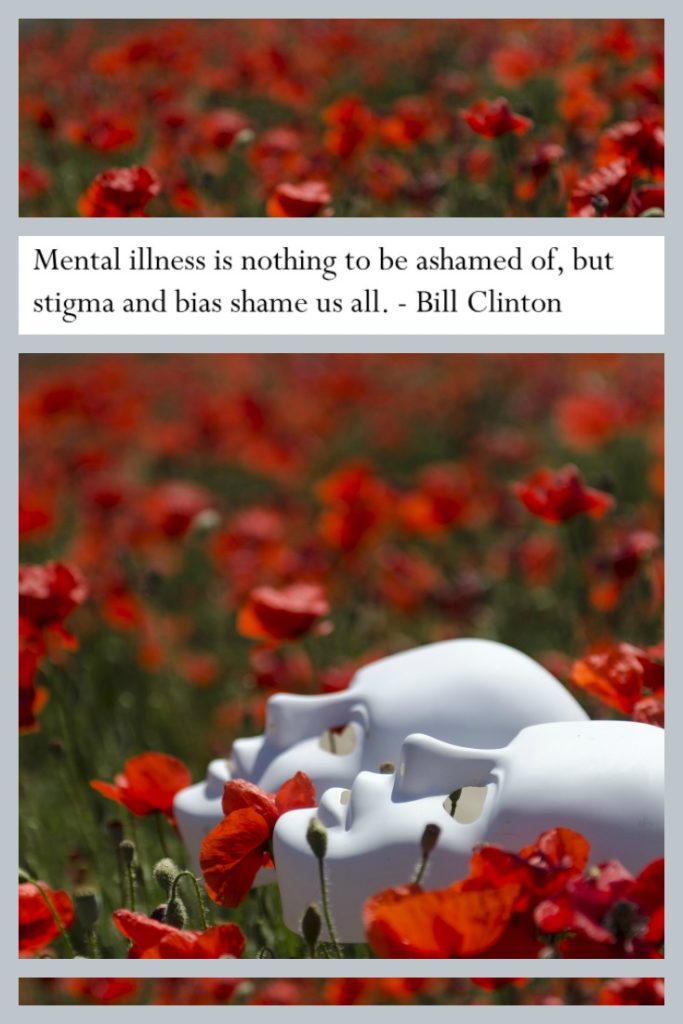 It is time to remove the Mask of Happiness and break the taboo of Mental Illness. We can’t help the things we aren’t talking about!

« A home for a Pin
Flashback, flash forward Friday – 5 tips for a short trip to Walt Disney World »

This website uses cookies to improve your experience while you navigate through the website. Out of these, the cookies that are categorized as necessary are stored on your browser as they are essential for the working of basic functionalities of the website. We also use third-party cookies that help us analyze and understand how you use this website. These cookies will be stored in your browser only with your consent. You also have the option to opt-out of these cookies. But opting out of some of these cookies may affect your browsing experience.
Necessary Always Enabled
Necessary cookies are absolutely essential for the website to function properly. This category only includes cookies that ensures basic functionalities and security features of the website. These cookies do not store any personal information.
Non-necessary
Any cookies that may not be particularly necessary for the website to function and is used specifically to collect user personal data via analytics, ads, other embedded contents are termed as non-necessary cookies. It is mandatory to procure user consent prior to running these cookies on your website.
SAVE & ACCEPT