It’s Mother’s Day weekend. I’m a mother, most of my friends are mothers. It’s a sisterhood, a group of women united. We recognize each other in the grocery store, the sidelines of the ball field, the car-pool line and even sitting idly in traffic. Our car bumpers full of magnets, our expressions distracted, and our hair frazzled, we know each other, we nod in recognition as another belonging to the group. The group of understanding, of enlightenment. Because that’s what happens, every year as your child ages, you see the world differently, you begin to understand. Understand where you have been, where you are going, and how God is getting you there.

I joined the group much too young. I was still much in need of my own mother, but because of a bad heart valve (and even worse lifestyle choices), I was left without when she died a few months before my high school graduation, leaving me suddenly thrust into adulthood that my 18 year old self was much to immature to handle. I floundered, barely treading water to keep my own self afloat when what at the time I thought was a stupid teenage mistake turned out to be what ultimately saved me.

JT was born when I was 19. This year he will turn 19. I have been a mother longer than I had a mother but now, as the mother of an adult teenager, I see so much more now than I did then. What my mother and I had was not healthy. She and my dad had divorced when my sister and I was young, and she was often absent in our lives, but I never gave up the hope that things would change and we would one day have a healthy mother/daughter relationship. I knew in my heart that it would never happen but after she died, it was like it was all forgotten and I could only remember the good times, of which there had been many before alcohol had taken over her life, but which had become few and far between up to the time she passed. My mother was damaged, and in turn she was damaging me. For years I held on to the last fight, the last words we said, and I wallowed in the guilt. I carried it with me, held it tightly in the depths of my soul and let it define who I was in too many ways. I blamed myself for her death and I vowed to be the best mother I could to JT.

JT was the kick in the butt I needed. After graduation, I had planned on joining the military so I could earn my way through college. We were a blue collar family, and there was no such thing as a college fund in my house. Unfortunately for me though, I am of the sickly sort and during a physical found out about my own valve issue. No military for me and no way for college either, so I got a job at the new Wal-Mart in my area and just floated along until I found myself somewhat in love but definitely pregnant. Marriage followed, another not so wise teenage decision, and JT within days of the ink drying on the marriage certificate.

We were poor. We were definitely becoming a statistic. Food stamps and trailer parks were in our immediate future and would be for years to come if something didn’t happen fast, but as teens the only thing we did fast was drive and spend money. More floundering ensued, until I overheard a conversation between family members. According to one, “I had so much promise and it was just too bad this is where I ended up.” Ended up? Was I done, the game over, the title credits rolling? Was this it? JT was in my arms and as I looked down into his sweet little old man face grinning up at me, I knew that it was time to fight.

I found a school with a flexible schedule and a day care center, applied and received grants and other aid and started nursing school at 20 years old. I worked full time, went to school full time, and tried to be a wife (which turned out to be not very well) and a mother (which I am still working on). During all the schooling and working, we had marriage-saver LouLou, but of course, it didn’t really save anything and within months of graduation and her birth, we were split up (again), this time for good.

Through all the life changes, the struggles, the joys, on to when I remarried and had my third child, I often lamented that I didn’t have a mom to share these things with, no grandma for my children, no one to rescue me when the world beat me up. It has taken me many long years, until just these past few months to realize what I really had.

I had my Nennie. My grandmother, my dad’s mom. Helen. The strongest steel magnolia I have ever been graced with knowing, the blessing God made sure I had in my life because he knew my own mother wasn’t. Nennie was always there for me. Before my dad moved us to ‘the country’ before I began high school, Nennie was just a bike ride away. She was who came when the school nurse called, the one who was always in the audience at every function I have ever been in, the person who sewed my dresses, cut my bangs, made sure my salvation was in order and taught me to be a lady. From her I learned what every southern woman needs to know: how to grow and can your own vegetables, how to sew, how to be gracious. My grandmother was mother to four boys, and my being the first grandchild and a girl, all the womanly things she wanted to share with a daughter went to me. I learnt her recipes, her quilting methods, her secret to beautiful gardenias.

She was always a constant presence in my life, always supporting me through my own trials, never wavering in her undying love for me. When the world got me down, she was there to lift me up. The older I became, the more life I had lived, the more she shared about her own struggles as a wife, mother, woman. Some stories surprised me, some shocked me. All bound me closer to her. Time passes, we age. Our roles reversed and it wasn’t long before I was the caretaker and she was the one in need of care. We carried on that way until the time came I wasn’t enough, and she needed full time, around the clock care. After her move to the nursing home, calls and visits became sporadic, not because of intention but her memory failed at times, communicating with her over the telephone was difficult due to her hearing and I was unable to make the what was now at least an hour and a half long drive to visit her, when before we had only been 15 minutes apart.

Nennie became ill just after Christmas last year. I didn’t know until after the new year, after it was too late and I was only able to visit once, when she wasn’t even aware I was there. She died a few days after my visit, during a time when my own mothering skills were struggling. That was the week that JT and LouLou decided that our house rules didn’t mesh with the life they wanted to lead and decided to move to their dad’s house. Of course I took it personally, letting my heart break openly and obviously. Nennie’s passing was just another assault on my heart, leaving me battered and bruised and once again lamenting my life without a mother to soothe me. My sadness overtook me, causing me to withdraw, and ultimately, reflect. It has taken me many months to see what I should have seen years ago.

Sometimes God takes away something to give us something even better. The folly is when it takes us years to recognize it, wasting time on the ‘what could have been’ instead of being blessed with what you have. I had lost a mother as a child, when my hippie mom decided she needed to go find herself and left my sister and I with our dad, and she remained lost to me, even when she was present, until she was finally lost forever. In losing my grandmother, I now realize that I have never really been without a mother. God gave me the best example of a mother, of a woman that he could. It is Nennie’s mothering skills he wanted me to learn, not the person’s who I had been born to. He brought other women into my life as well, women that have guided me, helped me and supported me, each one bringing another aspect of what I had thought I had been missing my entire life.

This Mother’s day I am thinking about my mother, and I am remembering the good times, but I am also able to reflect on the bad things finally, the things that I want to be sure I don’t repeat as a mother myself. I will always love her and I will always miss her but I realize now that I miss more the mother I dreamed of, not the mother I was born from. I am also thinking of my other mother. My God-given, real mother wasn’t natural, she didn’t carry me in her belly, and she didn’t nurse me from her breast but she did give me everything I needed in order to become an adult, a wife, and a mother myself. I see now that I have been blessed with two mothers, two examples of how to live and not live, to be and not be, as well as the sister-mothers who have come into my life at one time or another, helping to shape me, continuing to guide me. Standing by me when I need the motherly love I so often am missing.

I will continue to make mistakes as a mother, I am only human. I will also do what I can to positively influence the children I have brought into this world. Parenting isn’t easy, but it is worth it. I have two women, both who I want to make proud, looking down on me, guiding me along the way, along with a few other women who continue to guide me today. I hope I can be their light.

Happy Mother’s day to all mothers out there, be it natural or God chosen. You are the light that propels life forward. God bless you all. 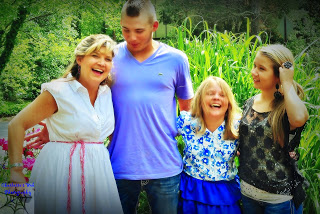